As the new geospatial analysis intern at Emu Analytics, the first software product I started using was Location Insights Explorer (LINE). Although I had some prior training in mapping data, my experience with working in GIS or similar software was close to zero. At first, I was a little worried about that, but it proved not to matter at all. After logging into LINE, the process of creating interactive maps becomes rather straightforward.

LINE is a powerful and versatile tool when designing all kinds of maps. It was created by the Emu Analytics team to enable businesses to harness the power of geographical data through an intuitive and easily accessible platform which requires no coding skills or prior experience in geospatial analysis.

1. It can be utilised by anyone, without need for advanced programming or data analysis skills;

2. Its output is simple, well structured and informative, and can be used to engage the public, facilitate sales and build a strong online presence.

The platform itself is neat and tidy, with an intuitive interface which guides you into the right direction. Uploading data is hassle-free, and the maps are created with a simple “click”. Adding additional layers, changing colour palettes and performing other such tasks is easy and does not require any programming skills, which makes LINE ideal for those without a background in handling and visualising geographical datasets. All in all, it took me less than an hour to understand how the software works, and then I quickly got to work.

I set out to create 5 interactive maps which should illustrate LINE’s capabilities, while also being useful and informative in themselves. With that goal in mind, I chose a few topics which I find relevant and engaging. After thorough consideration, I settled on crime, the environment and…. Well, bars.

The results are illustrated below, and detailed descriptions are provided for each of the maps, highlighting their features, why they are relevant, and how LINE’s unique capabilities have been harnessed. 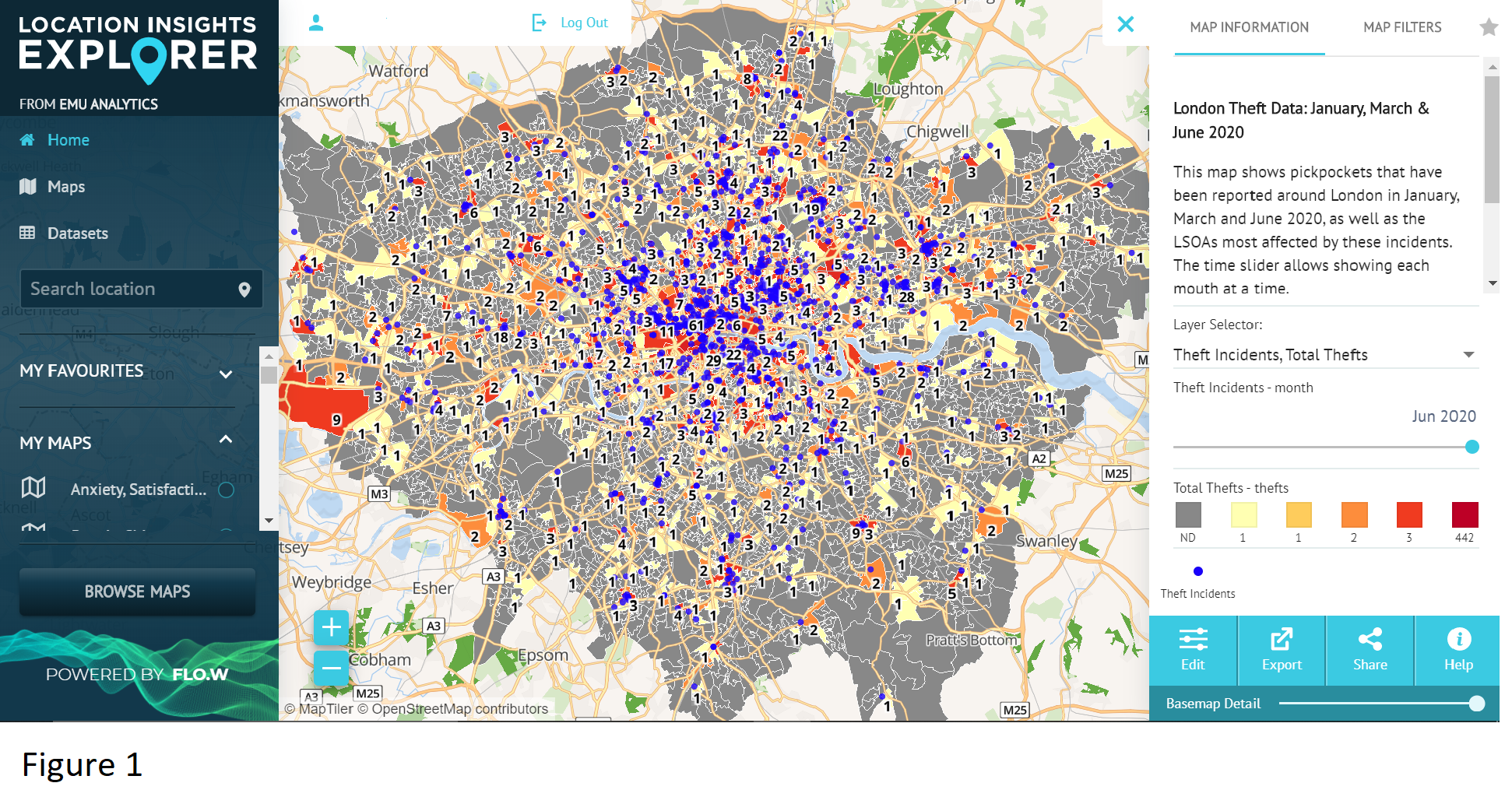 The number of thefts from the person in a certain zone illustrates some of its characteristics. Higher values tend to occur in crowded areas, typically transited by large numbers of tourists. Thus, it should come as no surprise that most pickpockets in London take place in areas such as SOHO, Camden, Westminster and Oxford streets, where thieves typically operate. Measuring how crowded an area is would normally require dynamic data, which may be difficult to obtain, cumbersome and hard to work with. The number of thefts correlates well with crowdedness, thus providing a rather accurate approximation of the latter.

Knowing how crowded an area is can be important when deciding where to open a new business. In the context of the pandemic, it can also show where people are more likely to get infected, enabling local authorities to take specific sanitary measures. Last but not least, knowing where crimes occur can inform as to where an increased police presence may be warranted, as well as where people should manifest increased caution.

2. The second map shows valuable environmental information regarding forests and protected areas in Romania, as of 2019. With multiple layers, it illustrates the forest surface (as a percent), the amount of exported wood, as well as the regenerated areas in each county. Furthermore, protected areas of national and international importance are highlighted. 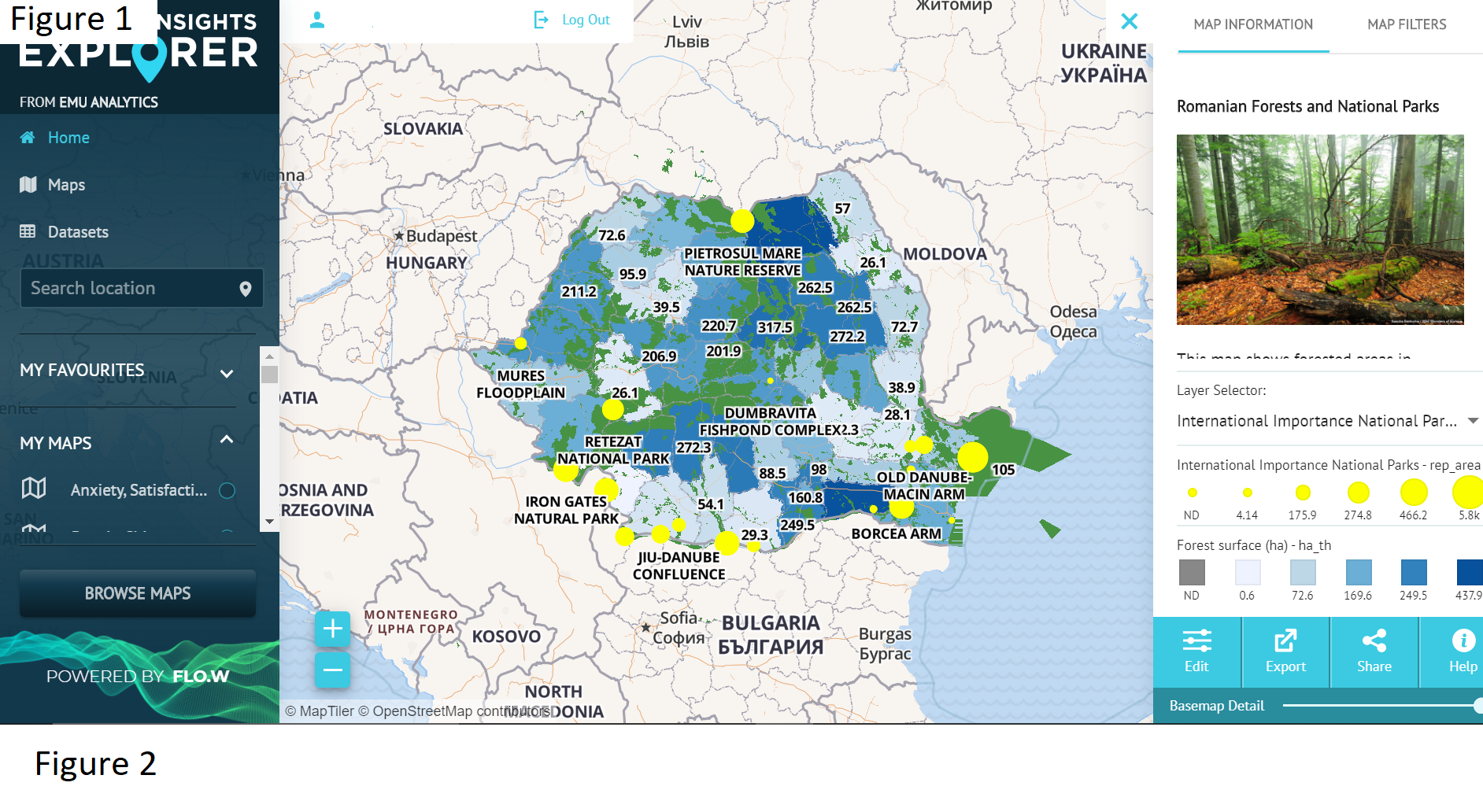 Excessive logging and unsustainable forestry are highly pressing issues in many parts of the world, including but not limited to South America, Eastern Europe and South-Eastern Asia. With increased environmental awareness among the Globe, governments and non-governmental organizations are increasingly in need of comprehensive and accessible insights into forestry practices. Graphical and interactive illustrations of this data make it easy for citizens to get informed about threats to forest ecosystems, without needing to surf through large amounts of raw data typically provided by the authorities.

Having an overview of how much logging and forest regeneration occurs in a certain area can inform both governmental actions to limit habitat destruction, and citizens’ initiatives to protect the most affected zones. Furthermore, the success of environmental campaigns can be greatly enhanced by graphical, interactive insights available online, making such software a valuable tool for activists and NGOs. Last but not least, mapping protected areas, as well as providing information about each of them, can be used to promote eco-friendly tourism to these destinations.

3. The third map illustrates the locations of coral reefs in Thailand, as well as areas where coral bleaching is known to have occurred, as of 2020. It allows the user to display either the reefs, the areas of bleaching, or both. Furthermore, it offers information about each reef upon clicking the relevant point. 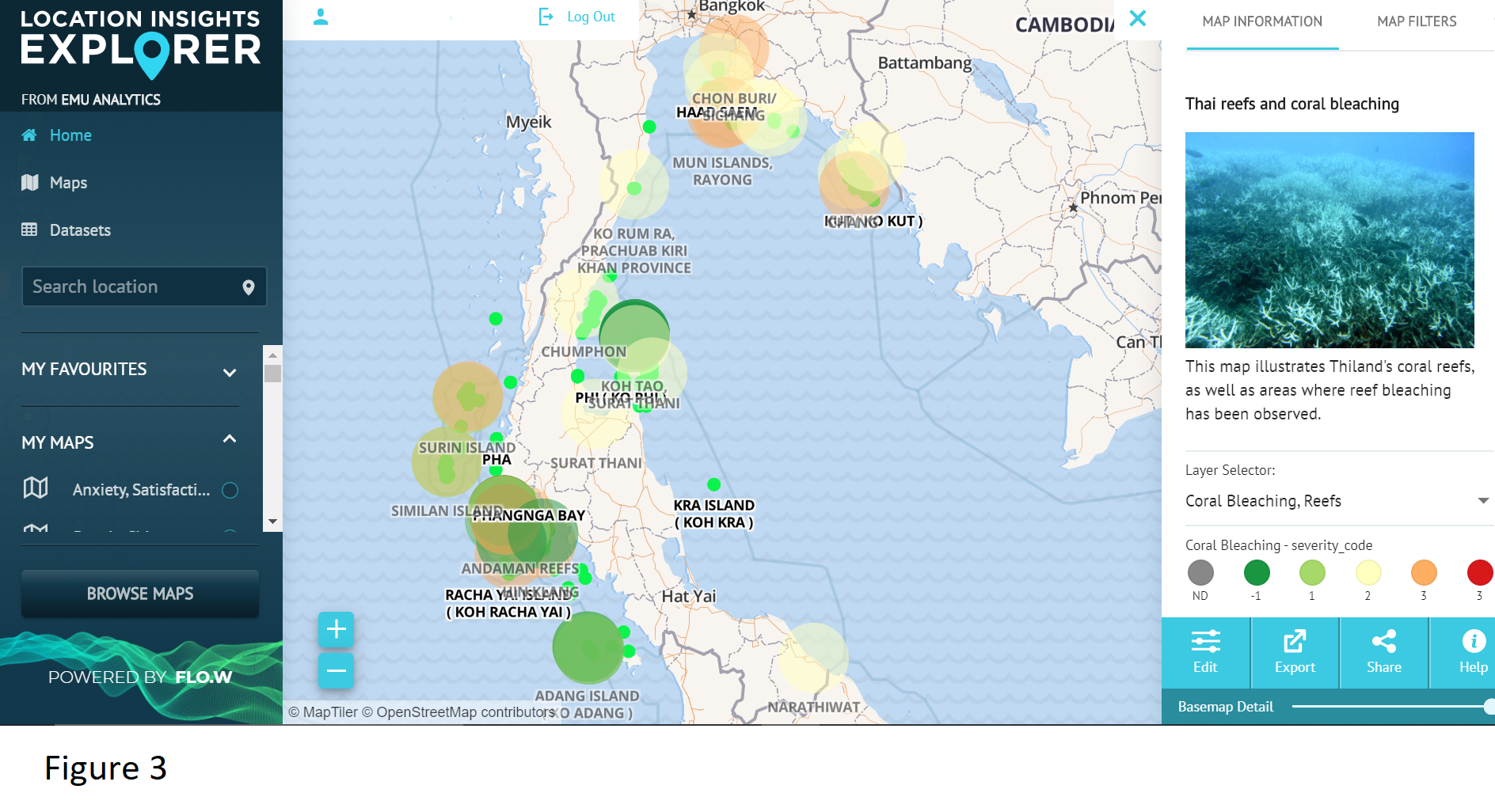 According to the United Nations Environment Programme, coral reefs around the world are dying at an accelerated rate, the phenomenon known as ‘bleaching’, mainly due to rising water temperatures, water contamination and unsustainable fishing practices. This map uses public data in order to highlight reefs and bleaching hotspots around Thai waters, as well as geographical and technical information regarding each of them. The same principle can be used to create maps of endangered archaeological sites, historical buildings, even disease outbreaks, among other potential applications.

Interactive maps like this one could help raise environmental awareness among the public, as well as provide graphical insights decision-makers can use when designing environmental policies, implementing fishing bans… etc. Furthermore, mapping the reefs, along with information about them, can be a valuable resource for scuba and snorkeling enthusiasts, and has the potential to boost eco-friendly tourism in those areas.

4. The fourth map is based on data from the Office of National Statistics report on the well-being of UK citizens, from April 2019 to March 2020. It has two layers that show mean reported anxiety and general satisfaction, respectively, in each UK unitary authority area and a third layer which highlights parks and public gardens across the country. Clicking on a region will display information about it, as well as the two aforementioned variables, whereas clicking on a park will show its name and other relevant features.

Gathering data on citizens’ attitudes is crucial when seeking to understand what is it that influences life decisions, consumer habits, political attitudes… etc. Mapping these findings is the most efficient way to generate an overview of the situation and compare findings across different geographical areas. Adding other variables, such as median income, pollution or healthcare quality to such a map can uncover the causal relations that link geographical characteristics to residents’ attitudes. Furthermore, value clustering can easily be observed and examined, illustrating Waldo Tobler’s “First Law of Geography”: “everything is related to everything else, but near things are more related than distant things”.

By observing the mean anxiety and life satisfaction of people living in a certain area, one can begin to understand which policies and environmental variables make people more or less happy, and can design specific solutions to the issues discovered. Such a map should be of interest to government agencies seeking to improve quality of life in disadvantaged areas, NGOs fighting poverty and inequality, and companies offering private services such as healthcare, transportation and leisure. Parks and gardens have been highlighted because access to them might be correlated with satisfaction and lower anxiety levels.

5. The fifth and final map shows the location of each bar in Chicago, as of 2020. It also has three other layers, which illustrate the density of bars, the population and the number of people/bar in each ward. Selecting a bar will show its name, address, zip code and license description while clicking on a ward will also display some information about it.

This map not only shows how efficiently point data can be handled in LINE but also how easy it is to superimpose it on the map that is already rendered on the platform. These two aspects make the environment ideal for illustrating stationary geographical features such as but not limited to businesses, police stations, speed cameras or even road potholes. The ability to quickly change layers, or display multiple ones at the same time, enables users to easily spot patterns and relations between different areas.

Knowing where the bars are is not only useful for fun-lovers and tourists, but also for real estate developers, police forces and businesses. Bars tend to cluster in central, crowded areas, with lots of economic activity, which can be observed on the map of Chicago. Residential areas, suburbs and sparsely populated zones typically have a lower number of bars, as a result of both urban planning and concerns about noise pollution. Their presence in a certain area could be seen as an indication of the degree to which economic activity occurs there, in general. Furthermore, bars tend to sell alcoholic drinks and can be associated with acts of violence, reckless driving or other forms of antisocial behaviour, which often requires increased police attention. Lastly, their presence is important for those who seek to open other businesses, such as tobacco stores, shops with extended nighttime hours and even hotels.