It’s been busy summer at Emu HQ and we have lots of exciting things in the pipeline. We’ve also hatched a new Emu so a big welcome to Jake Browning who is a whizz at all things web development! He joined us earlier in the summer and will be posting a blog soon where he will introduce himself properly - so watch this space.

It has been a while since we last posted a blog so we thought we would quickly talk about a dataset that caught our eye last week during half-term. Public Health England have recently updated their dataset on child obesity. This shows the prevalence of excess weight and obesity, at small area levels, based on the New National Child Measurement Programme. It looks at children in reception (4-5 years old) and year 6 (10-11 years old) and the results use a rolling three-year combination of the data, based on the home location of the child, to show trends at a granular level from 2008/9 to 2015/16.

The data is fascinating and terrifying. It really highlights how much of a widespread issue childhood obesity is. You can view the data for yourself in this interactive Story Map, but checkout some of the highlights below. 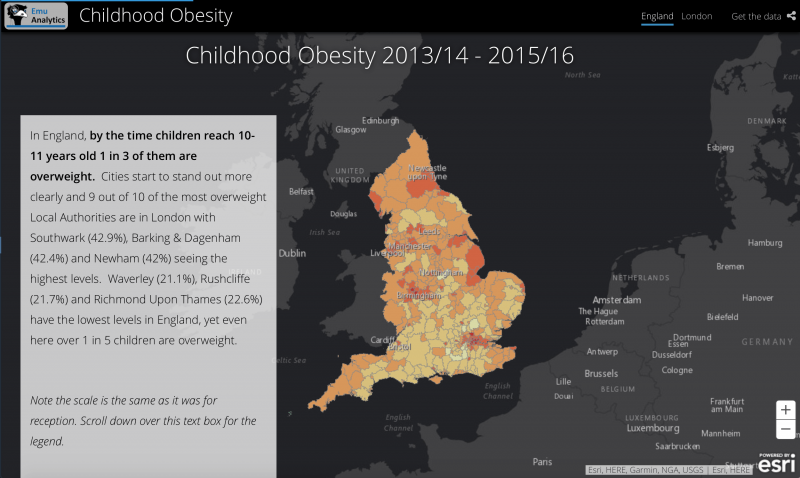 As mentioned the data has been presented in a Story Map, which you can see here, to make it easy to explore and interpret. Other data sets have also been included to see if they have any correlation with obesity levels. The OS GreenSpaces dataset shows the location of green spaces such as public parks, outdoor pitches and play areas and has been explored to see if the amount of nearby green space has any influence on obesity levels. Gross Disposable Household Income and Average Yearly Income datasets have been used to understand if there is a relationship between income and obesity levels.

I wont talk about the data any more here as its easier if you just view it yourself. The story map is fully interactive so all the maps can be panned and zoomed and features can be clicked on to see more details.