Do you know where your nearest postbox is?

This is a bit of a surprise blog as we didn’t know we’d be writing this a few days ago.

We were approached late last week by somebody at Royal Mail enquiring as to how we might demonstrate value from some of their fixed infrastructure data in a really quick time frame, which turned out to be around 12 hours.

The data set was simply the name and geo-locations of some of their post boxes within central London.

So, as per our standard methodology, it was a combination of:

Here’s what we managed (click on the link to go the app): 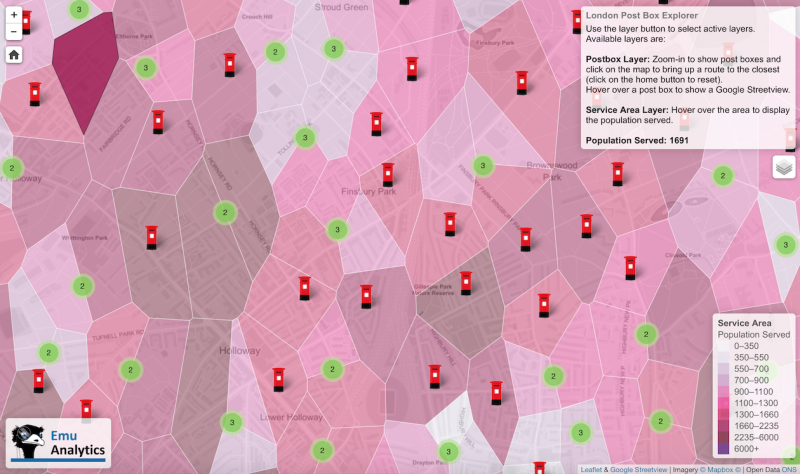 We thought this was a useful amount of information that could be produced simply from a non-sensitive but traditionally closed data set from Royal Mail merged with open data in a 12 hour turnaround.

It should be said that this is very much a demonstration, so isn’t perfect and there are obvious additions and improvements that could be applied in the future.

We do also acknowledge that other websites, such as localpostbox.co.uk, also offer alternative useful features relating to post box location, hence why we tried to shape ours a little differently with features such as the population coverage and the links to Google Street View.

Hopefully Royal Mail, and anyone else reading this, will find this as interesting as we did.

How We Did It

For this piece of work we relied on the colossal amount of open-source software that is available today, and the work of a passionate and vibrant development community. The application is built around Leaflet JS and Mapbox and supported by a multitude of open libraries:

Spatial analysis, including the creation of Thiessen polygons, was performed in QGIS.

UK census data was sourced from the Office for National Statistics (ONS).