CAN WE PLAY YOU EVERY WEEK?

CAN WE PLAY YOU EVERY WEEK?

OK, so this post isn’t really related to our core business but here is a fun visualisation to coincide with the launch of our new-look website and the approaching football season. The phrase above is often sung at soccer matches by fans of the team dominating the other. But aside from the published league tables, there aren’t many easy-to-visualise tools to show how one team has performed against the others over the course of the season. So we took that as a challenge and put one together before the start of the next English Premier League season and in doing so, demonstrate how innovative technologies and data visualisation techniques can uncover insights that you might not have unearthed before (which is most definitely not limited to just football scores!). 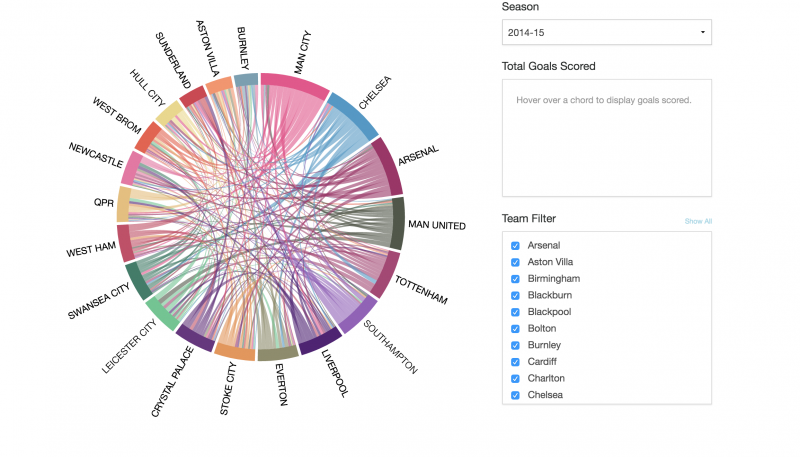 Here you have, season-by-season, an interactive chord diagram showing the number of goals scored by one team against another from 2006 to the end of last season. Click on the image to go the app.

The chart is interactive and you can navigate from season to season. If you hover over a team name, the chart highlights the performance of that team by showing just the match connections to other teams. If you hover over a connecting line from one team to another, you can see the total goals scored that season (home and away) in both directions.

You can even remove individual teams from the chart, via the filter, to see how the remaining teams performed against each other.

Using this visualisation you can start to pick out the successful teams for the year. These have a greater frequency of connecting lines, a longer arc and a tapering from large to small, which indicates that the goal difference is in their favour.

Additionally the colour of the line is determined by the team at the wider end of the taper (with the positive goal difference) so it becomes very easy to distinguish between the stronger and weaker teams. The teams with more prominent colour on the chart are stronger in the league, whereas the weaker teams have far fewer connections represented in their colour.

You can start to easily see which teams have over and underperformed without necessarily needing to see the final league table.

As you navigate through the seasons, the relegated teams are replaced by the newly-arriving promoted teams for the season.

As data and analytics becomes increasingly utilised by sports teams, so the methods of analysis and visualisation also need to adapt to the user’s needs. This circular chord diagram approach is a great way to visualise data that has this type of many-to-many relationship between the elements, in this case every team playing one another twice over the course of a season.

For this visualisation we have used the impressive D3 libraries and built upon an earlier chord diagram example created by Steven Hall.

The data for all the previous football match results was simply sourced from the Internet.