Up or Out? How Emu Analytics is Helping Solve the London Housing Crisis

Up or Out? How Emu Analytics is Helping Solve the London Housing Crisis

Emu Analytics recently teamed up with London YIMBY to help them communicate the issues around the lack of affordable, safe and decent housing in London, through a map-based interface. Crucially they wanted to show that there are many opportunities to intelligently build many more homes in London, within the existing built-up area.

You can view the final map here. 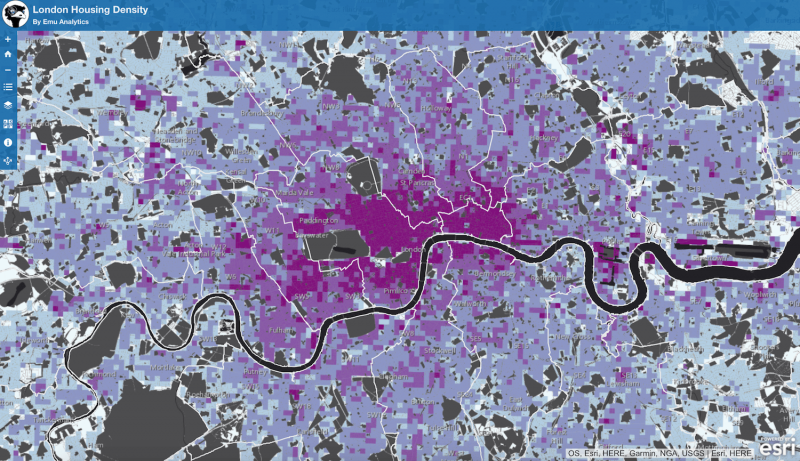 The main challenge as we saw it was:

Emu has some experience in communicating building information in an engaging way. Our Building Heights of England portal, representing building heights across England in 2D and 3D, is the number one listing on Google for ‘Building Heights’ within the UK and the freely available open data we created from it has been downloaded hundreds of times. As such we decided to use its methodology as the basis for a new map.

The next major decision was exactly what to show. The first key metric considered was housing density. There is a great open data set published by the ‘Valuation Office Agency’ that records the number of homes within an LSOA (Lower Layer Super Output Area) - where there are multiple homes within a single building, such as flats, then this is captured. The general expectation within London was that a map of home density will show some sort of hotspot within the centre, slowly getting cooler as you move further outwards, with the occasional cluster around smaller urban centres, which is fine. However for areas with large parks or industrial areas, this figure would be skewed and the area would look less dense on first inspection and incorrectly draw the eye to places that you could never build up. As such it was decided to produce a 200x200m housing density grid, clipped around known non-residential areas using Ordnance Survey Open Map and Open Street Maps land use data. The result is a much more representative view of an area, especially for park such as Richmond, in the image below. 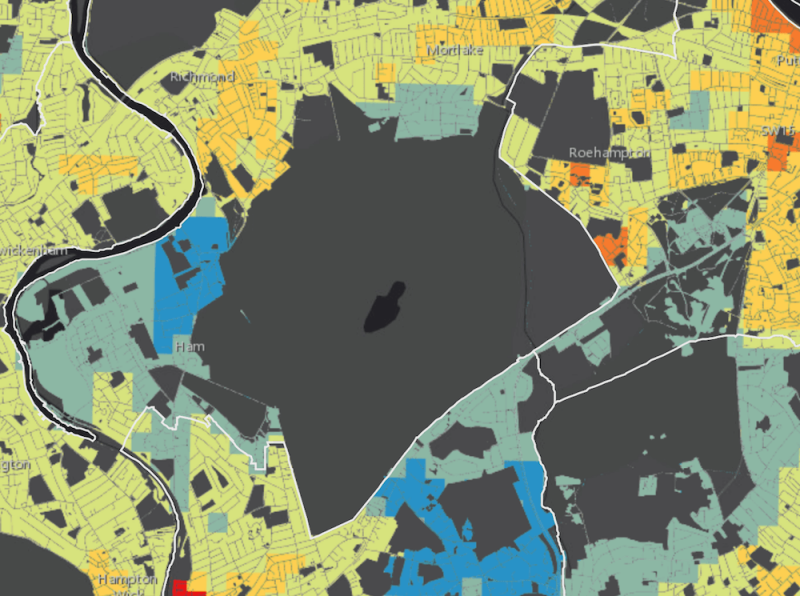 Of course identifying residential housing density is not the only consideration when talking about building additional homes. Homes can also be built over offices, train stations, supermarkets etc. As such it was decided to provide an additional layer utilising our building heights data (multiplying the area of the building outline by the mean height), looking at all building volume across London, aggregated to the same 200x200m grid. Now we have a truly representative view of the potential for home building in London, focusing in on areas that are lower in density than successfully built up neighbouring areas.

Finally we wanted to allow the viewers of the map an opportunity to explore the data and combine it with other useful layers to start drawing their own conclusions. The most obvious of these was a transport layer, including tube stations, lines and overground rail. We also included bus stops. This gives a better view of where building density has coalesced around transportation hubs, and may hint, for example, at how transportation policy may have to be addressed hand-in-hand with housing.

The resulting data was presented through ESRI’s ArcGIS Online Web Viewer so we had better control of key visual elements such as layer opacity and a choice of basemaps, not to mention a helpful sharing widget.

This piece of work was a rapid turnaround, going from scoping and design to realisation in a matter of days. We produce similar mapping for our clients and have an experienced GIS and Location Intelligence team that can help crunch, understand and visualise data to drive data-led decision making.

If you would like to hear more then please get in touch.