You may not have realised this, but today is World GIS Day (Geographic Information Systems for those of you who aren’t familiar with the term), which celebrates everything that technology has brought to mapping, location and geospatial analysis. This is obviously something very close to our hearts, so we thought we’d celebrate with a blog about some of our experimental work in this area.

We recently came across what3words, a very cool London based (index.home.raft) company who are trying to tackle the challenge of addressing, particularly for places where there is no readily available addressing system. Ok, so we already have street addresses and postcodes in the UK, but in many places in the world, places and “things” have no address that you can verbally share, other than as coordinates. To solve this they have assigned three unique words to every 3 metre square of the world (57 trillion in total!), and then made this service available as an API for developers to build applications on top of…and we just couldn’t resist.

We actually played with a couple of things. Firstly, we applied what3words addresses to the UK’s railway level crossings that you can see in one of our previous blog posts, which even Network Rail thought was cool when we tweeted it.

And just like that, a level crossing has a memorable address that can be shared.

Our second experiment was less serious and looked at how to make the what3words address easier to remember - we created what3pictures. 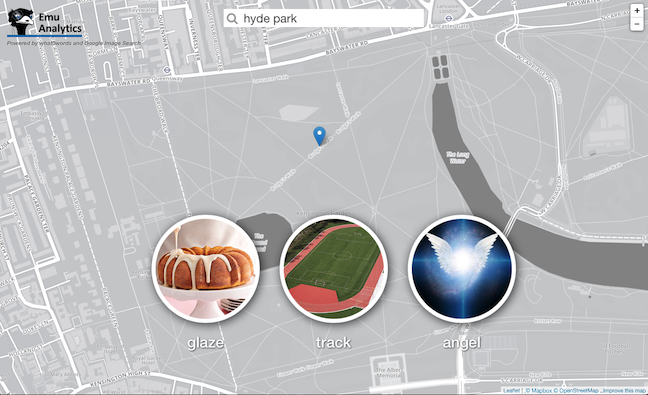 You can have a play here and see if you can find your favourite location (by pictures).

This uses the what3words API and the Google Image Search API to find the most commonly searched image for each word. Basemaps were provided by Mapbox and OpenStreetMap. The safe search image filter is applied to prevent any odd combinations of images being returned and make it family friendly (although it’s fair to say that there are still a few strange images out there).

Whilst this is fun for now, there are possibly some real world use cases for something like this. Imagine in a developing country where there is no street addressing and where literacy levels might be poor. The images could be another way of enabling communication of a location.

The association of images with words is also a proven means of aiding memory, as our brains are much more responsive to visuals than they are to words and numbers.

As Emu Analytics are an ESRI silver partner, It’s worth adding that what3words addressing is now available in ESRI ArcGIS as a geocoder service too.

For those interested in finding our more about what3words, then you can go to their website, and we’ve included a little bit of description about them below.

Accurately portraying your location to someone else is an issue across the planet. In many countries there are no postcodes and no proper address systems, people describe where they are by what is around them e.g. the third house on the left after the market. This can make it hard to locate someone. GPS coordinates can represent any location on earth but who can remember a long string of numbers and the system that its based on?

what3words has split the world into 57 trillion 3x3m squares and allocated each square a unique combination of 3 words. This is done using a complex algorithm which makes sure that similar what3words are on different continents so that any errors should be easily spotted. For example avoid.herbs.bond is at the back of Buckingham Palace and avoid.herb.bond is near New York. The complexity of the word is also related to the population density in that location, with smaller more common words used in populous areas and longer more complex words saved for more remote areas or the sea. 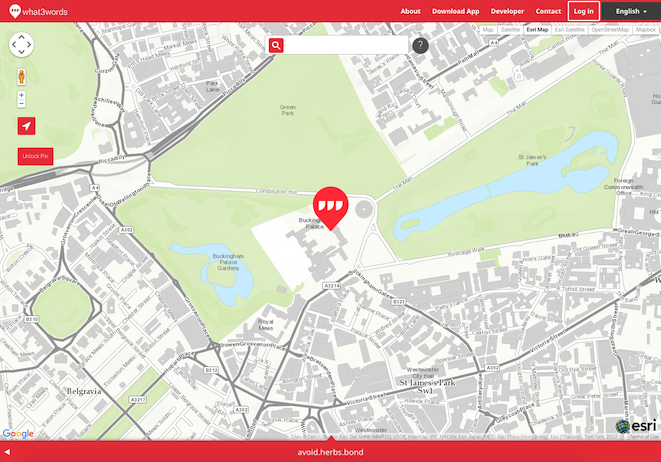 This means that everyone and everything on the earth has a location. Regardless of whether it is Buckingham Palace or a favela on the hill slopes of Rio it is assigned 3 random words and so removes any preconceptions or negative connotations associated with other address methods. It is also useful for locating things which may not have an address otherwise (see our blog post on rail crossings). Navigational nightmares such as big university campuses, where you are just given a postcode or building name, are also more easily negotiated when the place you are looking for is reduced to a 3x3m square. Similarly, it makes it easier to find friends at festivals and other busy events by limiting the search area meaning you don’t have to search through crowds and crowds of people.